Now five hundred years since it was built, the Renaissance Palazzo Bartolini Salimbeni stands in a magnificent urban setting in the heart of the city. It is undoubtedly one of the most renowned private buildings in Florence.

The Palazzo was built in 1520 by Baccio d’Agnolo, who had already created a number of important works in the city, both as a stone carver and sculptor, and as an architect, and received the commission from Giovanni Bartolini Salimbeni (1472- 1544), a prior and superintendent of the Mint. The result was a beautiful palazzo with an unusual façade bearing new architectonic features that were employed by Roman architects in those years, and in particular by Rafael. These include an architrave above the portal, pediments above the windows, niches for statues, belt courses decorated with the family crest, and large overhanging eaves.

The ownership of the building was made clear to passers-by not only by the lion placed at the sides of the façade, as a symbol of the Bartolini Salimbeni family, but also by the famous three poppy seed pods tied together by a ribbon and encircled by a ring. This is accompanied in the horizontal arms of the mullion-and-transom window – also reminiscent of fifteenth-century Rome – with the motto “per non dormire” (“lest we sleep”). The inscription is repeated in other parts of the building, such as in the sgraffito work by Andrea di Cosimo Feltrini (1477-1548), which adorns the internal courtyard and its elegant loggia.

The spacious interiors, such as the majestic hall on the first floor, have exquisite fittings, such as the monumental fireplace and the coffered wooden ceiling by Giuliano di Baccio d’Agnolo.

Perhaps the most significant artwork, however, can be admired from the three openings onto the splendid square below. At the centre of the open area is the Column of Justice, which was given by Pope Pius IV to Duke Cosimo I. A monumental archaeological treasure from the Roman Baths of Caracalla, it survived many incidents on its journey to Florence in 1563, and a few years later it was crowned by the porphyry statue of Justice by Del Tadda.

The Palazzo remained as the family residence until the early nineteenth century. It then became a famous hotel, the Hotel du Nord, frequented by the most illustrious visitors to the city, among which American writer Herman Melville.

Restored in the second half of the twentieth century, the first floor of the Palazzo Bartolini Salimbeni is now home to a museum space dedicated to Modern and Contemporary Art – the Roberto Casamonti Collection. 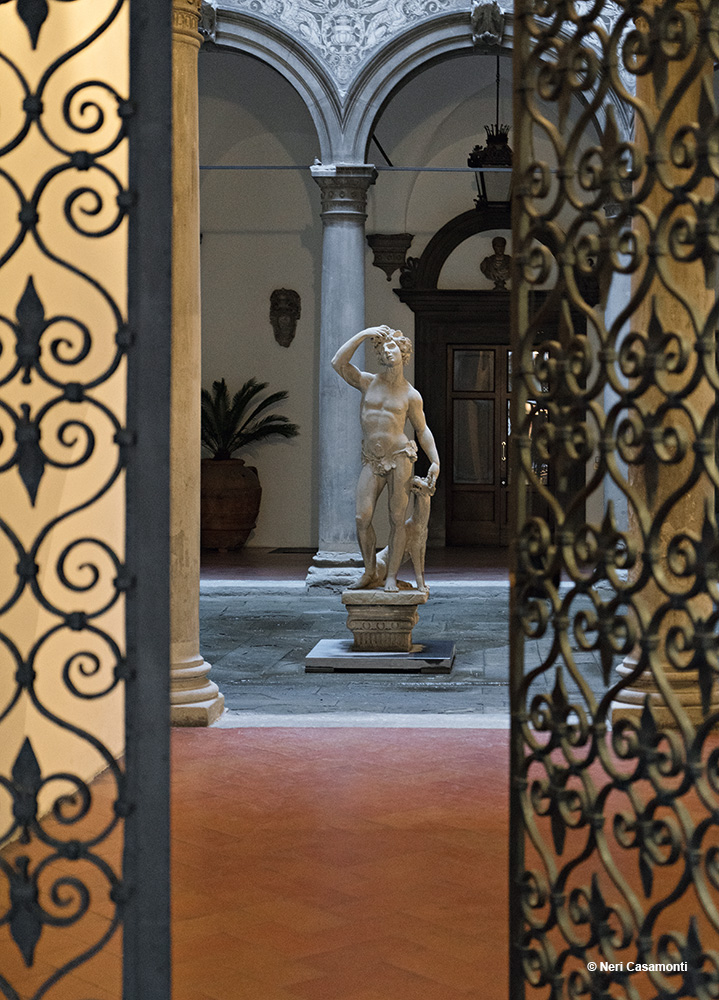 View of the courtyard of Palazzo Bartolini Salimbeni